Back to blogging about cool ways that technology will impact our lives, I need to spend a bit of time about Facebook “Places.”  As  an early fan of Foursquare, I believe there is real power in the check-in capability of Foursquare and it’s competitors, and I spent a fair amount of time and effort trying to help potential clients build a branded app that did something similar to achieve a corporate goal.  I still believe there is good business advantage to be gained by this sort of investment.  I even wrote a blog post on this subject a few months back.

And just like we all knew that the iPad (remember when we didn’t even know what they would call it?) would put a serious dent in the Kindle business, we all knew that when Facebook added check-in functionality that it would be a serious blow to Foursquare, Gowalla and others.

So now Facebook Places has arrived – and it’s pretty good.  Nothing to download, but a very solid experience that was easy to use and will be very easy for appphone users to leverage or ignore as they wish.  The video is quite good:

But here’s the funny part. Anyone who’s followed Facebook CEO Mark Zuckerberg’s story knows that he is one aggressive dude. FB would not exist in its current state if he hadn’t used sharp elbows to wrestle the project away from his classmates and make it the way he wanted (and yes, I will be going to see “The Social Network” – check out the trailer for that flick here. Well, here’s Zuckerberg’s not too subtle way of telling the folk at Foursquare that he is gunning for them. 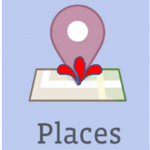 Maybe they should have added a few drops of blood to the image!

Prediction: Facebook Places will create an entirely new way for people to connect, in ways that Foursquare could never achieve.  Foursquare will still do fine. Gowalla , Loopt and the others will have a harder time. Corporations should still consider making their own local/social apps and should send me a note if they want to hear how.  Places everyone!